Bobby Bland and the Malibus Just Can’t Stand It 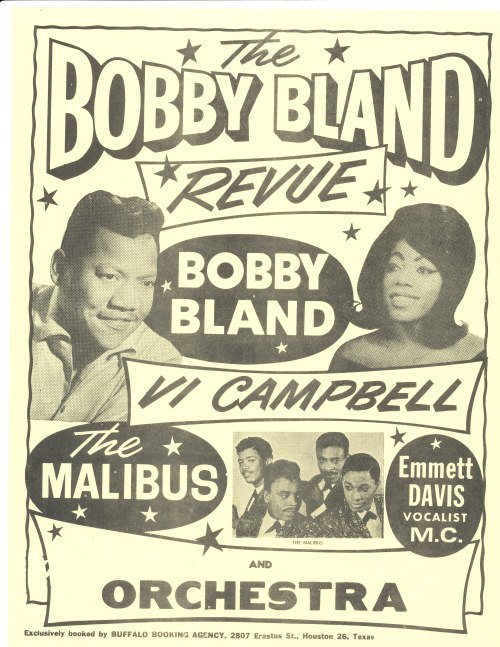 I’ve spent a lot of time attempting to track down anyone and everyone I can that had a hand in shaping the sounds of Houston’s vast soul scene. Over the years, I’ve found a decent number of long-lost musicians, a handful of hustling record label owners and fortunately, a couple fellows who produced their music.

That being said, there’s still a lot a people out there I’d like to sit down with and listen to their stories. Please send me an email if you have an uncle or friend that was involved locally with soul music in the 1960s or 1970s that I could speak with. The one thing I’ve had the hardest time getting my hands on is local music ephemera like posters, playbills and pictures. So you can imagine how pleasantly surprised I was when this Bobby Bland flier showed up in my mailbox recently.

Bland, born and raised in Tennessee made a name for himself more than half a century ago when he recorded his first record for Chess in 1951. It wasn’t long afterwards that he signed with the then-fledgling recording label Duke. After a short stint in the military shaped his resolve to sing, upon his release he learned Duke had been sold to Don Robey and its base of operations relocated to Houston to run side by side with his Peacock imprint.
END_OF_DOCUMENT_TOKEN_TO_BE_REPLACED