From Houston to Vietnam with the Masters of Soul 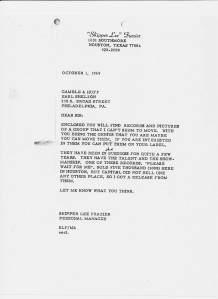 One of the ugliest parts of the Vietnam War was the havoc it waged right here on the home front. A discriminatory draft system promised legions of African American men would be forced to leave their girlfriends, wives and children and head off to a questionable war they wouldn’t return from for a minimum of twelve months. And that was the upside of the situation.

Uncle Sam was hell-bent on stopping the spread of Communism, much to the detriment of the American Solider. Sadly, many wouldn’t come home alive and some of those who did, brought home new demons like drug addiction or Post Traumatic Stress Disorder.

For the loved ones back home, it could all just be too much for a relationship to bear. It’s easy to become lonely when there’s an ocean between you and the world you know. The Dear John letter became all too commonplace in this incomprehensible era of callous Cold War.

Vietnam was an all too-real part of life if you lived in the sixties or seventies. Your best friend was there, your brother was there, your son was there, and your husband was there. You could be going there. It’s no wonder that the Southeast Asian war inspired countless artists to write some of their best material. 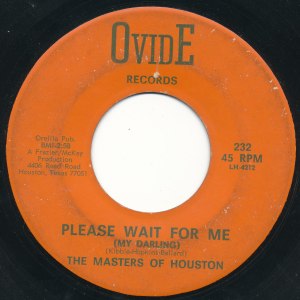 Local Houston vocal group, Masters of Soul recorded what may have been their finest moment with this very inspiration in mind. “Please Wait for Me (My Darling)” is a sweet soul workout that finds the narrator pleading with his love interest to “Please wait for me (my darling) while I’m away across the sea.” It’s also one of the more unique soul recordings done in Houston for the expansive use of strings. Something seldom accomplished locally due to both cost and finding someone to arrange their parts. Fortunately, band leader Fred Kibble could manage just that and the resulting recording pressed on Ovide earned the group a new contract with the heavy hitting Capitol label.

The group was forced to alter their moniker due to a contractual dispute from Masters of Houston to the much more apt Masters of Soul. The change took place just in time when “Please Wait for Me (My Darling)” was given a second pressing with national distribution on Capitol, the same label responsible for releasing the bulk of the Beatles catalogue. Unfortunately, the record made little impact and shortly after a second release “No Doubt About It” backed with “Do Da Electric Twist” failed to bring major league level sales, the group was served their walking papers sometime in 1969. 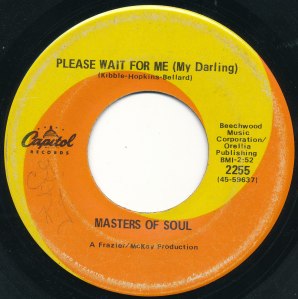 Their manager, Skipper Lee Frazier, still felt the band was destined for the stables of a major label besides his local Ovide imprint. Here’s a letter he wrote to Philadelphia-based producers known to have the Midas touch, Gamble and Huff. The duo had already worked with another member of Frazier’s roster, Archie Bell & the Drells and produced a nice fistful of chart-topping numbers for Atlantic.

But as it would turn out, the group, though first-class, never did work with Gamble & Huff. They’d go on to record a handful of songs for Ovide before making a jump to Duke Records for one last release before disappearing into the ether.

Have a listen to “Please Wait for Me (My Darling)