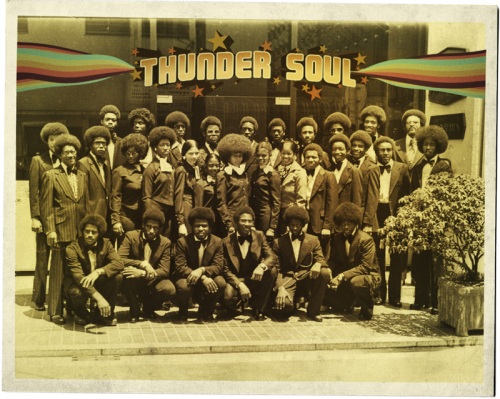 Finally, after its SXSW premier back in March, Houston will get some soulful recognition, paid in full tonight. Mark Landsman’s documentary Thunder Soul, the story of the Kashmere Stage Band will screen this evening for free at Discovery Green Park as part of Houston’s year-old Cinema Arts Festival. I was fortunate enough to be present during the shooting of the film and have been eagerly awaiting its local unveiling. Afterward, there will be some words with Landsman and the KSB director’s son, Conrad Johnson Jr as well as a performance by the band.

If you find yourself in Houston tonight, you should really be here. It’s a great moment for civic pride and a hugely important part of the history of Houston music. If you’d like to learn more about the story of the Kashmere Stage Band, here’s an article about the group I wrote in an August issue of the Houston Press titled The Thunder Rolls. And no, I didn’t name the story, yes the editor did in fact name it after the Garth Brooks song and no, I will never forgive him for it.

Things kickoff at 6:45 at Discovery Green Park and you can learn more about the event at the Cinema Arts Festival website.

Here’s an interview with Landsman about the film.